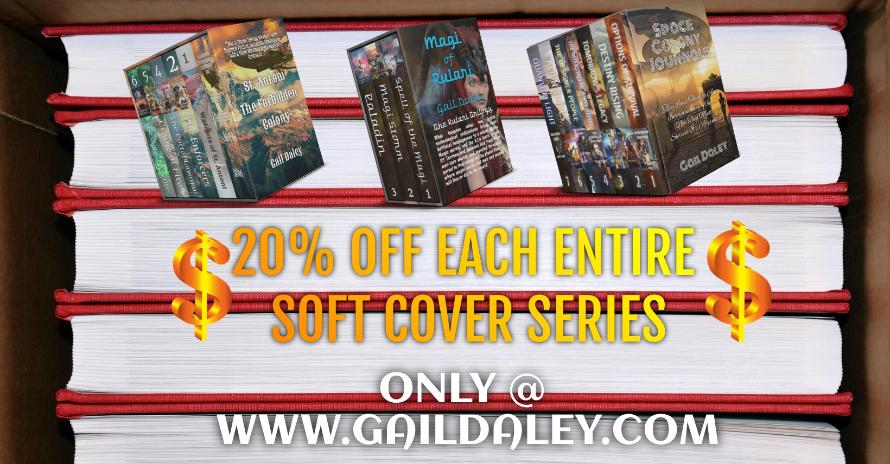 Over the years, I've constantly changed or updated my book covers. This is not to fool readers into buying the book a second time, but to keep the covers from being outdated as the mores for Sci-Fi and Fantasy covers changes. Recently a fan asked me for a list of the changes, as she was experiencing difficulty telling which books she had already purchased. I've created a separate page with the old and new covers. If you are confused as well, click here

They lived through an interplanetary war; now they must survive its aftermath. Welcome to the far future. The Space Colony Journals are an epic tale of a family's struggle to survive on a colony in space. These are the courageous women and dangerous men who carve a home on the Alien World of Vensoog

Patricia A Adams on Goodreads 5 Stars

I read all six books, in a row, in a few days. Yes, that good. So sorry there are no more in the series - lots of characters still need love! The storyline was very fun, the characters were amazing, the story flowed...I just absolutely loved these books. You will want to read them all, I know you will! The world Gail created was really fun and interesting. I am not going to give any storyline away, just read them. You will be happy you did! Kudos, Gail for an amazing series!!!!

I was delighted to find two 5-star reviews of ALIEN TRAILS on Goodreads! CLICK HERE for the review by CJ on Goodreads

CLICK HERE to read the review by Patricia on Goodreads

Juliette is a strong capable woman and Isiah is a good calm man to stand by her side. Isaac was a fool. I look forward to the next stage in the saga and can't wait to see who the story will be about.

The will to survive is mankind's greatest weapon

In the last interplanetary war a bio-weapon killed or sterilized all the males on Vensoog.  To keep the colony alive, the Matchmaker Program finds ex-soldiers like Zack Jackson, a hard-as-nails ex-recon soldier who no longer has a home planet, and offer him a new home on Vensoog if he is willing to marry a Vensoog woman. With his home world now pile of radioactive ash, Zack desperately needs a new home for himself and his kids so he accepts the offer.

When the Matchmaker Program pairs him with Katherine, they both wonder if it is a match made in Heaven or Hell? They need to find out quick, because the ruthless Thieves Guild wants the valuable data cube their kids stole back. And they are willing to kill anyone who gets in their way.

Plus, Katherine is falling in love with her new husband and she hasn't a clue if he feels the same about her…

To save their planet from a hostile takeover, a warrior/priestess joins forces with a bard from another world and five genetically designed children.

Drusilla: A Dragon Talker, born of a line of powerful, psychically gifted women, she has been trained from birth to command the beasts of Vensoog, but can she command her own heart?

Lucas: An off-world survivor of an interplanetary war, he is the untrained hereditary Bard of his people with the ability to compel with his voice. He recognized Drusilla as his soul mate when he met her, but can he convince her they are meant to be together?

Lucinda: given a genius level IQ whose enhanced creativity genes made her the perfect icy planner. But those same genes spark a need for order and balance at odds with the goals of her masters.

Violet: a powerful empath whose alliance with the Vensoog Sand Dragon Jelli gave her the courage to defy her masters.

Rupert and Roderick: the intuitive chemist and the genius code cracker who turned out to be a lot tougher than their masters anticipated.

Only by working together can this diverse group stop the ruthless Thieves Guild from enslaving their planet.

Lucinda was a "designer child". Given genius level intelligence in an embryonic Thieves Guild lab, she learned survival in a harsh world. At twelve, she was rescued and adopted into a loving family. As an adult Lucinda chose to fight her former masters by joining the police force. She works hard to earn her place among Vensoog's law enforcement community.

On her first assignment, compassion impelled her to protect an alien mother and daughter fleeing off-planet bounty hunters. To ensure their safety, she must defeat a deadly Soturi warrior in hand-to-hand combat.

Then she rescues a 'designer child' who is a younger double for herself from a sex trafficking ring. To solve this case and rescue the other children trapped by those same criminals, she must capture a vicious Thieves Guild assassin.

But even with the help of the best private eye on Vensoog, these are tough cases for a rookie cop.

A family of innocent botanists finds themselves thrust into the middle of a drug war on an alien planet.

Rupert and Aire have come to Trellya to negotiate the purchase of plants Rupert uses in the medicines and cosmetics his company makes. The dactyl Pelcon is with them because he goes everywhere Rupert goes. Sesuna came to find out what is happening on her family's estates. Teenage Selick came to see Trellya and meet the birth mother who sold her to the Thieves Guild as an infant. Will she love her or hate her? Either way, Selick has a lot of growing up to do.

To her horror Sesuna discovers her family's property has been over-run by rebels who plan to finance their revolution with the sale of Submit, a banned, highly addictive drug employed to make users compliant. They have already planted some fields on her property with the plants used to create it. If she can't prove her innocence the Magistra will use this as an excuse to seize the estate. But Before Sesuna can destroy the fields she and Selick are kidnapped by the rebels, whose leader intends to force Sesuna into marriage to gain control of the estate. Can Rupert and Sesuna defeat him and save her family's lands?

What happens to soldiers when the war ends? If their planet was a casualty, where do they go?A marriage of convenience between two determined, strong willed people sparks a planetary war and puts at risk everyone they love.

Laird Genevieve O'Teague, a beautiful, strong-willed woman became the leader of her people at seventeen. Colonel Gideon Michaels had been a soldier who controlled thousands of fighters in the war. When it was over he needed a new home for his orphan niece and his adopted son. Genevieve's offer would provide both, but could he follow his heart and learn to trust and love his new wife? Vensoog is under attack by pirates and when Genevieve and his niece are kidnapped by an agent of the Thieves Guild, Genevieve and Gideon must learn to rely on each other and their newfound love to defeat their enemies.

Welcome to the far future. The Space Colony Journals are an epic tale of a family's struggle to survive. These are the courageous women and dangerous men who carve a home on the Alien World of Vensoog

When she finds the body of a retired shopkeeper on the beach, a series of mysterious events draws Lady Jayla into a web of passion, terror and murder.

She finally realizes that if she wants to stay alive, she must figure out who the killer is before she becomes the next target.

She faces a slew of other problems while dealing with this crises. She needs to control her dysfunctional house-bot who thinks he's a sex-bot, and cope with Jake, her nosy boyfriend and her overprotective family. She has to find a way to stop the interplanetary jewel thieves who keep breaking into her shop looking for their missing loot. To make matters worse, the local and interplanetary detectives investigating the theft and murder think she either stole the jewels herself or that she makes excellent bait for the real thieves. Take your pick.

All girls look for romance and adventure, but sometimes its better if you don't get what you ask for...

Juliette receives an assignment from the Parliamentary Council that both excites and intrigues her. She and her Dactyl Saura join an expedition team searching for the Lost City of the Elder races.

Accompanied by a diverse group of explorers Juliette discovers there are many dangers on the unknown continent of Kitzingen. When the exploration team encounters refuges from a crashed Life Boat, she spots a Thieves Guild tattoo on one of them and is immediately suspicious.

But the dangers on the expedition are nothing compared to what awaits Juliette when she returns home. Her old enemy, the brutal and callous Van Doyle, intends to kidnap her loved ones.

He has placed a bounty on the heads of Juliette's younger siblings, and it is one his men intend to collect even if they kill to do it. Does Juliette have the courage and skill to foil his plans and save them? Or will they disappear, never to be seen again?